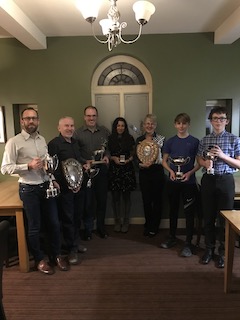 FENLAND Clarion’s ‘Ironman’ Paul Lunn cleaned up at this year’s club prize presentation at The Farmers in Yaxley on Saturday (5th Feb), after winning virtually all of the club’s races during the 2021 season.
Wins in the Championship 10 and 25 mile events, plus the Cullip Cup 25 mile, Helpston Classic, Hill Climb and Place to Place events, saw Paul also take the Club Championship Series. During last season he also took a new Club Record for 100 miles with a 3.39.56 in the Burton and District event in September and Veterans Records for 25, 50 and 100 miles.
Other notable winners were Lindsay Clarke, who again won the Club Womens Championship and was the fastest female over 10 miles, while establishing a new British record for her age group during the Sherwood event near Nottingham, again in September.
Chris Shaw took the Clarke Merit Cup for his outstanding performances in 2021, with new Veterans records at 15, 25, 30, 100 miles and 12 hours with 256 miles (which also earned him the Berridge 12 hour Shield).
Youth rider Evander Wishart took the Stuart Ede Cup for the best six times during the course of the midweek Bluebell TT series and lifted the Holmes Merit Cup for his Cyclo Cross performances and his 24.50 in the National Youth 10 mile TT Final at Mallory Park.
Harry Tozer, Tonya Smith and Dave Hallam were also presented with awards on the night.