The club committee would like to update you, the members, on the position regarding the possibility of returning to the regular organised clubruns we all enjoy so much.

The government guidance is that groups of up to six people (from different households) can meet and exercise outdoors and maintain a distance of at least 2 metres.  We still feel it will be difficult to observe this guidance correctly and have our rides open to all so are not restating club runs at present.

In taking this decision, we are mindful not just of our members’ health, but also our responsibilities to the wider community as we all hope the general improvements made in the fight against Covid-19 continue.

We hope you still get out and ride responsibly with your friends and clubmates until the organised rides return; please feel welcome to use the clubs Facebook page to help you meet up and we will be meeting once again to discuss these further on 3rd August.

If TTs can restart...

Hi All
Bearing in mind TT's might be starting up again soon (Potentially from 6th July, subject to the go ahead from the CTT) would there be any appetite to extend our Club TT season through October with some weekend events (Saturdays and Sundays).
Evening TT's will have to stop as scheduled (Last Bluebell 19th August), due light constraints, but I don't see why we couldn't run some Bluebell 10's, Championship 25, 2 Up, Helpston Classic and Place to Place at weekends in August, September and October.
Obviously, we'd need to take into account any other local Open events and it maybe easier said than done.
If there's enough riders interested, I will do my best to organise.
Let me know your views and ideas and whether or not you would support.
https://www.cyclingtimetrials.org.uk/articles/view/559
Steve

There is a lot of information coming out at the moment from the likes of British Cycling, Cycling Time Trials and the official Government messages themsevles.

With that in mind the club committee will virtually meet on 15th June to discuss the restarting of club activities as soon as we are able and its safe to do so.

In the meantime please refer to the British Cycling article here.

The key paragraph being....

Last week (Wednesday 27 May) we announced that all formalised group and club activity (including club runs, HSBC UK Breeze rides and similar) would be suspended until Saturday 4 July, and this suspension remains in place.

Thank you all for you patience, support and co-operation in what has been an unpreceded challenge for those who run the club.

The sell off of Impsport kit is proving successful with only a couple of jerseys now left.

There are still stocks of caps, mitts and arm warmers available.

Going forward all club kit will be available to order through the online store and to launch that there are a number of new club products for you.

For any orders of products that are in our Ellmore stock locally, you will get the choice to have posted or collect and have postage charge refunded.

Stock is selling fast on the Impsport kit.

There are not many jerseys left so here is the current stock list.

We are now out of long sleeved kit and bibs.

Thanks to all for their enquiries. I will get back to you as soon as possible.

Quiz via Zoom is now tomorrow Thursday 14th May 7pm

To get access please contact This email address is being protected from spambots. You need JavaScript enabled to view it.  to join.

We have a few pieces of Impsport made club stock still available.

To help us sell it through and to give members a special one off offer. The prices of jersey's will be further reduced from £30 to £15.

If you are interested, please This email address is being protected from spambots. You need JavaScript enabled to view it. James by clicking the link or message him on Facebook. 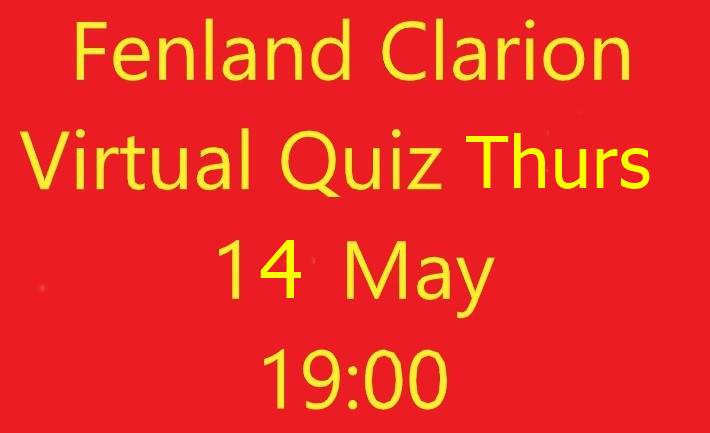 An opportunity to meet up with your clubmates once again following the popularity our first Virtual Quiz we will holding another on Thursday 14th May, please note the date change, all welcome.

For a number of years our group of volunteers has been campaigning for the creation of a new cycle route in Peterborough , west of the existing Green wheel, that would avoid the dangerous stretch of the A47. We now have a viable design and the support of the major landowners , the Nene Park Trust and the Nene valley railway. Our route would connect with the existing route from the city that runs to Castor and Ailsworth and then go along quiet roads to the village of Sutton. From the village it would run along a disused railway line before crossing the river Nene via a new set of steps and the footbridge to the NVR Wansford station. Once over the river cyclists could cross the A1 using the flyover at Stibbington and go further afield. The new route would be a major improvement for local cyclists of all kinds, both for families wanting to cycle out to the NVR station, for cycle-commuters wishing to cycle to and from the city and for local people wanting to travel between local villages. Please see the attached map for details . it would also compliment the planned route for ‘non-motorised users’ that Highways England will eventually be building alongside the improved A47.

Now is the time we need your help- as we will shortly be applying for planning permission to Peterborough City Council, we need to show how many people support our route and wish to encourage more people to cycle for their health, their enjoyment and to reduce the need for car travel.

Chris Farrow and Ian Todd are both on the PCWP committee and can vouch for the project being of real value to cyclists in providing a country route from the Southorpe/Sutton side of the river through to Stibbington/Wansford & beyond, avoiding the dangerous stretch of the A47.

If you could read the email and confirm your support for the project by emailing mailto: This email address is being protected from spambots. You need JavaScript enabled to view it. , which will greatly assist the planning application that will need to be made, and permission granted, before work can commence.

With thanks to Dave Hallam for organising.

I sent RGT cycling a gpx file of the Bluebell route and they created this 3D simulation of the course. Riding it will be a Zwift-like experience. The scenery will be strange but the corners and gradients will all be like the real thing. It's all free at the moment (you need to download an app to your phone and another one to your screen if you have one).

This will berunning as a group ride on Wednesday evening at 7 pm on the RGT cycling app. DdHoO8JDi8

Former Fenland Clarion rider and member Ian Clarke has stepped down from the position of Secretay of the National Clarion Cycling Club at the recent Easter Meet, which was held virtually.

Clarke has held the post for many years and is looking to spend more time with his family.

All at FCCC would like to thank Ian for his efforts, wish him well and look forward to see him soon.

Ride a virtual Wednesday night 10 and let us know

We are desperately keen for all of our members to follow all government advice and stay safe during this current period of lockdown.

Lots of you have been talking on social media about your virtual riding on various platforms such as Zwift, Bekool and Tacx.

So please keep your distance from others and share us your rides via Strava. Fingers crossed we will all be back out on the heath before long.